Finally, after many weeks of not doing anything crafty at all, I managed to get in a few hours of creativity this weekend.  I was determined to do SOMETHING, even if it was just planning stuff out so I would have a head-start next weekend.

I desperately need to get started on my Christmas cards for this year.  I am so behind – normally I have some done by now but I have zero. Zip. Nada.  Which is pretty bad.  Especially since it takes me FOREVER to make just one and I need about 30 at least.  I don’t like resorting to bought ones, but the last couple of years I have had to.  And it irks me.

Anyway, enough waffling.  I sat down late on Saturday night and doodled a few little designs, so that they would be dry and ready to be coloured/painted on Sunday afternoon.  (Please excuse colouration of photos – I used Instagram and forgot to take any pics on my regular camera). 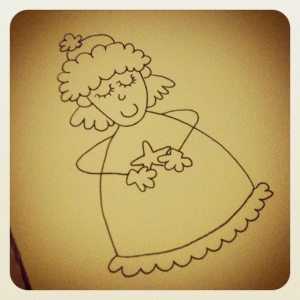 On Sunday, after attending a lecture on “Anxiety across the Lifespan” (interesting, I enjoyed the information on how the brain actually works during anxiety, and learnt about the Hand Brain Model which is useful for explaining said processes in an easy-to-visualise format) and having lunch with friends (Yum…Beetroot and Haloumi Salad at Circa), I went home and got stuck into painting my little peeps.  I did them rather brighter this time, not giving them the more pastel/watercolour look that I have done previously.

I added some elements (skin on face and hands, hair on some of them) with a Copic marker.

Then I got fed up altogether with using paint at all (I was having a wobbly hand day) and tried just using the Copics.  I only have a few colours and many of them are drying up (Lord knows how old they are…I have had them ages).  I didn’t have a nice bright red – just a deep burgundy colour.  But it looks ok and wasn’t too streaky, although on the larger areas, such as the body, I did feel it showed a bit too many streaks and patches.  Probably more to do with my technique than the pen itself…plus I was using watercolour paper so it probably wasn’t the best medium to use the pens on.

Finally, as it was nearly time to stop and pack up (ha ha – I say “pack up” like I am actually going to do that, instead of just leaving out for three weeks), I had an epiphany of sorts and decided to try paper-piecing instead of painting or colouring.  The result was the little lady below.  I kinda love her.  She looks a bit Charlie and Lola-esque but that was unintentional.  I really like the effect of the patterned paper and it was so much easier and less curse-word-inducing than painting or colouring in.  I still used the markers for the smaller elements (skin, hair, pom-pom etc) but used paper for the hat and dress.  Voila!

I have always liked paper as a medium.  I don’t know why I didn’t just do it like this to start with.  I have a ridiculous amount of patterned paper, so I should be able to make a load of cards like these in no time.  Although, truthfully, it will still take me forever, because I am picky about coordinating colours and patterns.  But still, at least I accomplished something for the weekend!  Last night I finished off the day by sitting and doodling lots of heads and hands, hat bands and pom-poms so that I can put them together with the papers at a later stage.  Hopefully not too much later.  I don’t want to go another month without creating.  It’s too important and too much fun and makes life much more enjoyable 🙂