Hello everyone 🙂  Hope your weekend was nice and relaxing, or busy and challenging if you prefer that kind of thing!  Mine was lovely – spent much of it with family and friends and the weather was gloriously warm.

As it was my Mum’s 70th on Saturday, I spent Saturday night and all of Sunday with her.  She had planned various little get-togethers, so we spent a lot of time sitting drinking tea and feeding our faces.  Can’t complain, but my diet has been seriously derailed.

We also had another guest come to tea, and she brought her whole family.  This Wolf Spider decided to hang out in Mum’s kitchen with all her babies.  Hundreds of babies!  If you look closely, you will see is she hauling them around on her back.  It makes her look much bigger than she actually is (even though these little critters can get pretty big and scary ha ha) and you can see in the second picture how much smaller she is.  It was a really hot day when she came in so we put a dish of water out for her.  We’re a bit weird like that 🙂  We used to have a spider that came down every day for a drink of milk – fascinating to watch and really cute. 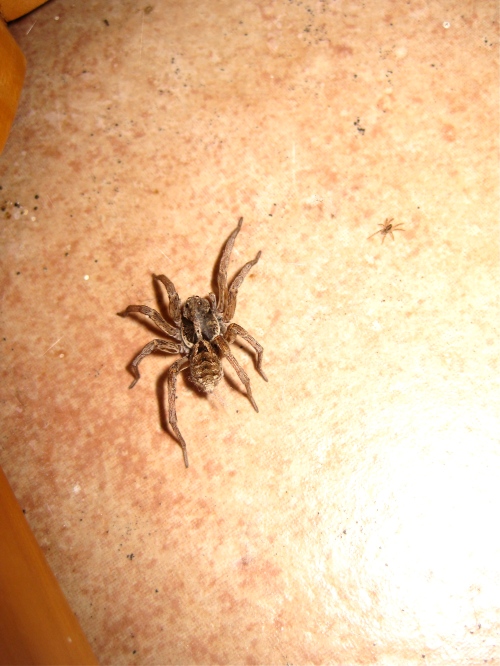 Anyway, this baby-momma had LOADS of little free-loaders on her back and basically proceeded to dump them all in Mum’s house overnight.  Tiny wee things they are and they will eventually make their way outside because that’s where the food supply is!  A few of them sadly met a watery death in the bowl of water we had left out.  Whoops.  Not sure if they fell in there when Mummy Spidey was having a drink or if they wandered in by themselves.  RIP little dudes – your lives were cut tragically short!

Wolf Spiders are venomous but not in the deadly sense – they can give you a painful bite if provoked, which can lead to swelling, itchiness and general localised pain.  If you’re really unlucky you might have a worse reaction, like nausea, headaches, dizziness etc.  But I’ve been around these critters my whole life and they pretty much mind their own business and don’t go around attacking people unless provoked.  For instance, there was the time I got out of the shower and wrapped a towel around me.  Hmmmm, I thought, there’s something scratchy in this towel…opened the towel only to discover a VERY LARGE  Wolf Spider sitting rather grumpily on my hip.  Cue screaming and panicking.  Now, I am not squeamish about spiders – I don’t kill them or worry too much about them in general –  however I do draw the line at a humongous hairy beastie the size of my hand catching a lift on my naked body.  But she didn’t bite me, that’s the point I was getting to.  They’re not overly aggressive – they will sometimes rear up at you a bit if you provoke them or try to relocate them with a broom or something – but they’re not jumpy, bitey creatures.  Unless you’re a fly or another insect.  Apparently, some of the larger species of Wolfy can also catch and eat frogs and toads.  Am I freaking you out yet?

This little lady in Mum’s kitchen was only small and has a lot of growing to do.  Having incubated and hatched her babies, she has done her job and now she will go off and live her life again.  The babies have to fend for themselves now (actually, even when they are with her she really only protects them by having them on her back – if one falls off it’s tough luck!) and hopefully not fall in to any more bowls of water!

P.S : I had to include this close-up shot from the Australian Reptile Park (all photo credit to them) – isn’t it gorgeous? Those eyes!  And, um, those fangs!