Can you imagine us
Years from today
Sharing a park bench quietly?
How terribly strange
To be seventy

Time it was,
And what a time it was
It was . . .
A time of innocence
A time of confidences

Greetings!  Another weekend gone by and another Monday rears its ugly head…well I guess that just means its another day closer to Friday, right?

I had a busy weekend with not much time for crafting.  I had some family drama to sort out and some friends who needed help, so I only had a few hours on Sunday to get some arty time in.  I worked on a few different collages and, I think, due to my distracted mind, completely screwed most of them up.  Ugh – so annoying.  I had nearly completed one and then I added some stamped words and TOTALLY RUINED IT.  Gah!  It wasn’t salvageable at all so I will have to paint over it and start again.  Makes me so sad.

Anyway, I did complete one just for me.  I’d had a few collages pieces ready to go together to make this little winged goat girl, and it was time to get her properly cut out and stuck together (before I lost parts of her – I have a terrible habit of whistling while I work which means I am forever blowing things off my table and losing them!).

I had to re-draw her little shoes because much of them were cut off or obscured by the foliage near her feet.  I think I did an ok job. 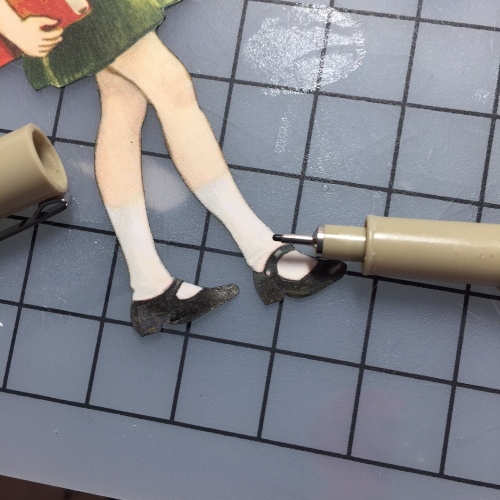 I screwed up the scalloping on the top and bottom of the canvas – they should be the other way around – but I am hoping no one notices the words are upside down!  I also stamped the words a bit, um, wonkily. But I am trying not to let that bother me.  Perfection is boring, right?  Somebody please say yes!

Overall, I was pretty happy with it.  It’s for me and I don’t often make things to keep.  But the words are from one of my favourite songs (see lyrics below) and it just felt like something I wanted to have for myself, for once.   And yes, they are my raccoon pj pants you can see in the background…

Hope you are having a good day and doing your brutish best
to find some joy and creativity (even if you screw up the words and get things wrong).

“Friend Of Mine” – Liz Phair

Not a lot of patience
You’re not a patient man
Don’t have a heart to stay with
You get it while you can
Just because you can
Get out of it
And I wasted your time, denying
That that’s the reason we fight all the time
It’s been so long since you’ve been a friend of mine Gonna take a vacation
Stop chasing what I lack
Am I gonna get blown off
As soon as I get back
On another track
Without you

And I wasted your time, denying
That that’s the reason we fight all the time
It’s been so long since you’ve been a friend of mine

And I wasted your time, didn’t I?
And that’s the reason we fight all the time
It’s been so long since you’ve been a friend to me
It seems like I dreamed and now I’m waking up to daylight
What happened, when did you let go of me
I miss you so badly

Fly away where a new world waits for you
Always look back though
Not to cry, and not to regret
Just to help who’s left behind
Help us all to heal and understand
Cause we don’t know why you had to leave
I can only guess it was time for you to be free
To ascend to a broader more wonderful life than this
I believe you’re in a better place now
A place where only beautiful souls will hold you
Be sure to comfort, and protect your children
They need you now
Stand behind them
Rise within them
And love them

— Beautiful Peace by The Murmurs 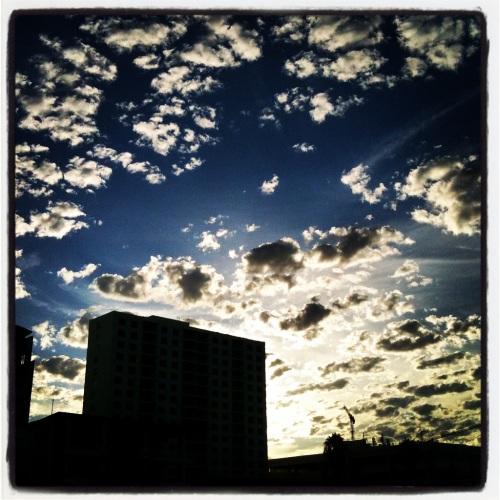 I have always loved songs.  Ever since I was a child, I felt there was a real magic in music and songwriting.  I remember sitting, mesmerised, on our charming lime-green carpet (hey, it was the 70’s ok?) in the sitting room, listening to the radio and singing along to the pop songs I heard.  I knew all the Grease songs off by heart.  I couldn’t read yet but I knew how the stereo worked.  I just loved music and felt better with it around.

As I got older, I guess I tuned in more to the lyrics themselves, what the artist must have been feeling when they wrote the words, and what they meant to me in turn.  I used to fill notebooks with song lyrics when I was a teenager.  They spoke to me in some corny way that I can’t explain.  I even tried writing songs myself but they were pretty bad, but I enjoyed the process.

A few years ago, I decided to combine two of my loves – music and collage – into one big piece of artwork for my wall.  I started off with an ugly old board-mounted picture that I painted over with white house paint so I had a smooth, clear surface.  I started cutting out letters from magazines and worked out what lyrics I wanted to put on the board.  I didn’t really have a plan, I just cut and glued as I went, fitting in lines as I could and trying to keep it straight.  The first few lines were a bit wonky but after a while they got into line and remained fairly even. 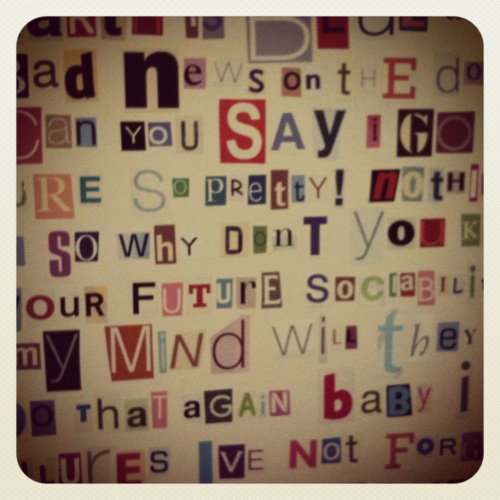 It took a lot of time.  About three months to be exact.  I could only really work on it at weekends and maybe some evenings.  It was very therapeutic – I could totally switch off while I was doing it and just concentrate on whatever letters I needed next.  I just used PVA glue mixed with a teeny bit of water.  I brushed it on with a paint brush and didn’t have problems with bubbling or rippling.

I still look at it every day and read the words.  It’s no great work of art but I love it and out of everything I’ve ever made, it is one of the most important things to me.  If you took the time to read it you would find out who I am, how I feel, my fears and concerns and also my hidden sides.  At the time I was making it, I was going through some stuff and so some of the words are really just me asking for help and wishing the world was a kinder place.  Some of the words relate to specific people in my life, places I’ve been, situations that I’ve encountered.  Some of them are just lines I love because they make me smile.

And, if nothing else, if I ever need to construct one of those ransom notes that kidnappers use in the movies, I will be well-practiced in the art of clipping out letters and gluing ’em on!

So, it means a great deal to me, that silly piece hanging up in my lounge room. Most people don’t take the time to really look at it when they visit – and that’s ok.  Do you have something you’ve made that really sums you up?  Something that just says “This is me?”   Because this collage is me, every little wonky letter and line.  You just have to look closely to see me in it.